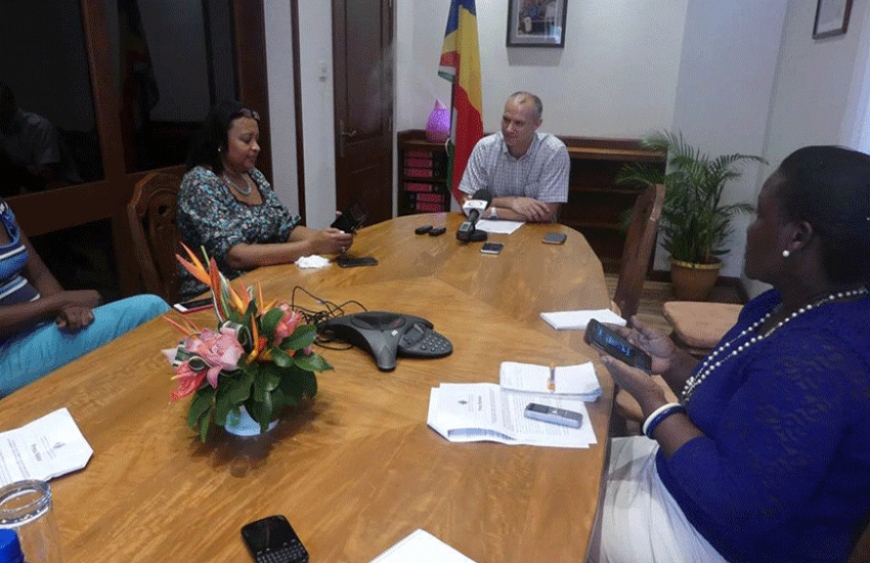 TODAY in Seychelles, 9th Marth 2016: The Minister for Finance and the Blue Economy believes the decision to settle country’s debt with the Paris Club means more money to promote sustainability and protect the environment

Latest efforts to settle the country’s debt with the Paris Club have resulted in more investment going towards conservation, the Minister for Finance and the Bleu Economy Jean-Paul Adam has said.

The minister made the announcement yesterday while speaking to journalists during a press conference organized by his ministry at Liberty House, when he revealed that Seychelles has bought back $21.4 million dollars worth of its debt from the Paris Club.

The Paris Club or Club de Paris in French is an informal group of officials from creditor countries whose role is to find coordinated and sustainable solutions to payment difficulties experienced by debtor countries.

Debt held by the club relates solely to what is owed between countries, and does not necessarily reflect what is owed to commercial entities, stressed Minister Adam speaking through a statement initially.

He said the government reached an agreement to settle its debt with the Paris Club in February of last year, but that it has since been working on the modality through which the agreement would be realised.

The$ 21.4 million debt swap agreed on just now happened through the Seychelles Conservation Climate Change Adaptation Trust (SEYCCAT) he stated, noting that the environmentally- minded organization has in fact bought the worth of debt announced by the ministry.

Detailing further he explained that SEYCCAT was set up recently to manage a grant of $5 million received from environmentally concerned individuals (including world famous American actor Leonardo Dicaprio), to advance ideas promoting sustainability and protecting the environment.

The Trust should be in a position to sustain the sum trough to 2022, advanced Minister Adam, adding that interests gained on it will be granted to local partners involved in conservation, to pursue projects meant to facilitate ecological and marine protection.

Elaborating further he said money used to buy back the $21.4 million worth of debt was borrowed from The Nature Conservancy (TNC) at a concessional interest rate of three percent, which will in turn be granted to SEYCCAT to disperse amongst non-governmental bodies and individuals looking to benefit from funds meant for conservation and sustainability work.

“Consequently, what was owed by the government to Paris Club will now be paid directly to SEYCCAT, which effectively reduces the country’s debt by 25 percent”, declared the minister for Finance.

“One of the advantages of this is that the debt will now be paid in rupees, and to a single party which is bound to keep interest at a low rate”, he pointed out.

When asked about the country’s debt altogether Minister Adam said it currently stands at 63 percent of its GDP, but that he was not in a position to state a fixed sum.

Responding to questions relating to the loan acquired from TNC, Minister Adam remarked that it is easier to acquire loans from these institutions in this manner, rather than for the country to try and exchange its debt in order for it to continue to do its part for the environment in return.

“It is more difficult to acquire loans via the main stream as a high income country, and we are thankful that the African Development Bank has agreed to keep assisting us as a middle income country rather than one of high income”, he clarified.

Journalists also questioned the composition of board members managing funds belonging to SEYCCAT, noting that a few organizations represented on the board would have an advantage on the others when asking for grants.

Minister Adam said awarding grants would be decided by an independent panel on which board members with vested interest would not be allowed to sit.

He said the composition of the board, on which he sits as chairman, is as it is because capable and competent individuals involved in environmental work, are needed to facilitate further work that needs to be done.