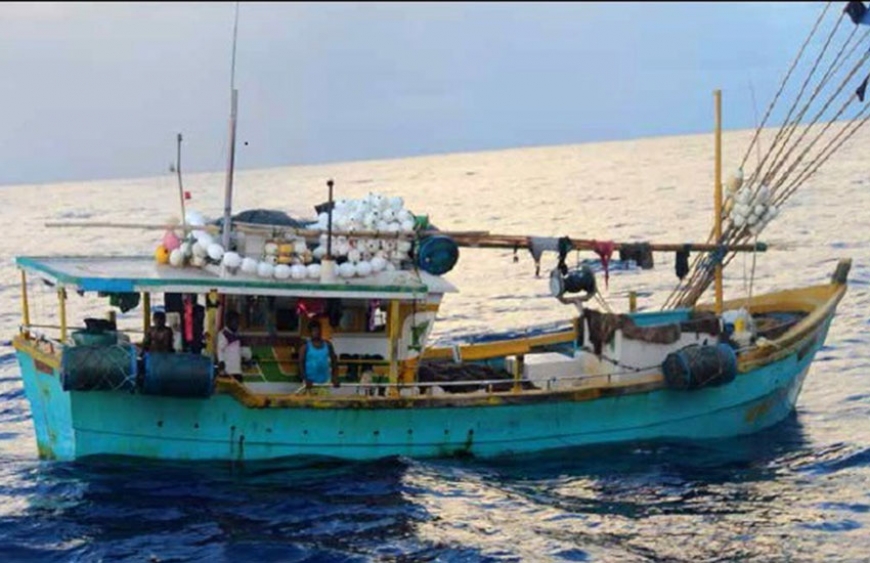 P. Mawanda, TODAY Newspaper, 5 May 2015: The country’s move to establish the Blue Economy may remain a pipedream if issues such as illegal fishing are not addressed. But are the authorities adequately armed to deal with the situation?

With the country aiming towards establishing a strong Blue Economy sector, illegal fishing activities in the waters of Seychelles continue to be a problem and if not stopped, could prove to be a hindrance to the project.

And yet, despite all the actions taken by the Seychelles Fishing Authority (SFA), the Seychelles Coast Guard and the fishermen themselves, illegal fishing is still very much an issue.

According to sources who were out fishing on Friday 17 April 2015, an illegal Sri Lankan boat was fishing some 100 miles off Mahé. At around 5:00 pm, the fishermen called the Coast Guard to report the matter and give the boat’s coordinates so that the authorities could apprehend the Sri Lankans.

“We did not apprehend them because it was impossible for us to deploy anyone to sea at that late hour. It was late for us,” Lt. Hans Radegonde of the Seychelles Coast Guard explains. When asked how many illegal fishing activities the Coast Guard has come across, Mr. Radegonde said that this year alone, three cases involving one Sri Lankan and two Indian dhows had been reported.

While the figure may seem minimal, if unchecked, such activities could be detrimental to Seychelles. Illegal, Unreported and Unregulated (IUU) fishing continues to be an attractive option for many fishermen because of the big profit margin associated to it as compared to legal fishing. But while this type of activity might bring in more money to those who carry it out, it has devastating effects on countries in whose waters it is practiced.

In developing countries such as Seychelles with a pronounced vulnerability to such activities, the consequences on the Blue Economy could be devastating. The Blue Economy concept is largely dependent on the protection and sustainable management of sea resources and can only be a reality with no or controlled illegal fishing activity in the country, an area in which urgent improvement is needed.

TODAY spoke to the minister of Agriculture and Fisheries, Wallace Cosgrow and this is what he had to say with regards to illegal fishing in the country:

“I inherited two illegal fishing cases and during my time one case was settled out of court where certain monetary compensation was paid but the other case, we did not manage to prosecute because of lack of evidence. I think more can be done although we are already doing a number of things. It’s a huge ocean that we control. I think the Coast Guard and Seychelles Fishing Authority (SFA) are doing their bit. Most importantly the fishermen are reporting such cases. There are hundreds and hundreds of boats out there who are the eyes of Seychelles. They are the ones who see these people and who report them. I think everybody is doing their bit but in terms of having successful prosecution, we need to do more. It is difficult to establish whether or not someone is guilty because when these people are caught, the first thing they say is that they are lost and do not know where they are. In instances where they are caught with fish, they claim they did not get the fish in the Seychelles water as the fish was caught before they were caught. With no anchors or fishing gear in the water, it is hard to arrest such fellows. We need to come up with better and stricter ways of catching these people and later prosecuting them,” Minister Cosgrow commented.

Yet, when fishermen report such illegal activities to the authorities, there is no guarantee that actions will be taken. Asked about what is being done and what can be done to stop illegal fishing, Mr. Cosgrow replied that the government is doing everything they can to prevent such activities. A new Fisheries Act that outlaws illegal fishing has been introduced. Also, the Seychelles Fishing Authority, the police, the Seychelles Port Authority and Seychelles Coast Guard are developing a new strategy aimed at sensitizing the departments concerned with regards to “what can be done to stop illegal fishing”.

Except that the Coast Guard needs to be able to react promptly whenever they are alerted to such activities. The SFA has not commented.