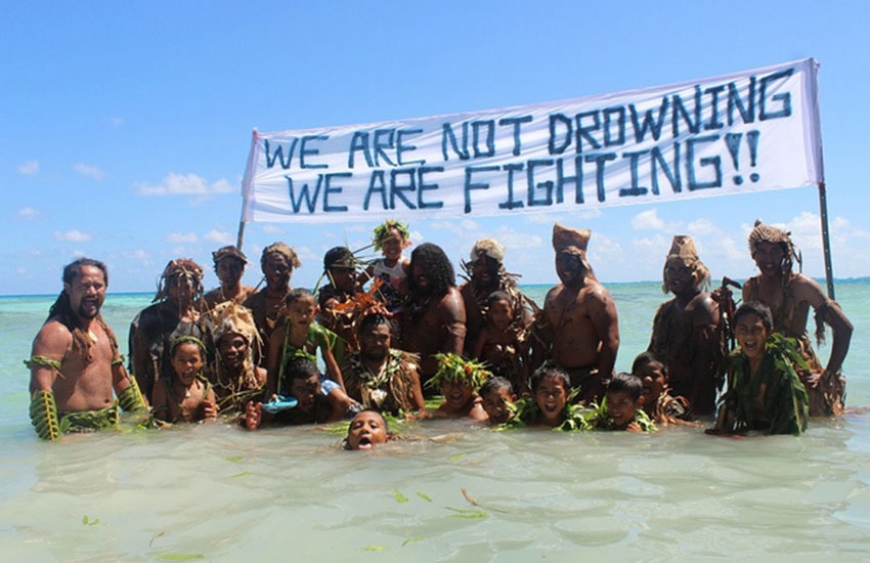 The People, 4/9/2014  This whole week I’ve been eating “gro manze” for lunch and dinner. Crazy, you say. But this is the staple food of many islanders all over the world including our own ancestors.

I’m in Samoa attending the Small Island Developing States (SIDS) third international meeting as part of the Seychelles delegation at the kind invitation of President James Michel. “Lerouy” (or taro), breadfruit, bananas and plantains are the staple of Samoans, and in fact many Pacific islanders. Everywhere you care to look, in every garden even in the conference center grounds, “gro manze” (literally translated as big food in English) are so common I can only describe Samoa as an Edible Landscape. Samoans make sure that all households are food secure – I suppose the way Seychellois did in the past with the similar crops. But the food choice is extremely limited. A disease for example or rising sea levels could wipe out one or more of these staples and people would starve. Seychelles is different, you say. We have a wider choice of foods, you would argue. But, hang on, unlike the Samoans we import 70% of non-fish foodstuffs! We are so dependent on foreign food for food and nutrition security I get a headache thinking about all the implications.

The UN’s big boss Ban Ki-moon said that “Samoa is small in size but big in heart” at the opening of the SIDS meeting. No matter how we spin it, the challenge facing all small island developing states is usually described as one of size. Many SIDS are not large enough to have proper infrastructure, their populations are small which result in lack of capacities, the economies are miniscule which cause a host of problems including inability to reach, what economists call, economies of scale, they do not have mineral resources, their small sizes are not attractive enough to interest large investors outside the tourism industry. But at the end of the day it’s really about limited options. Seychelles may have greater food diversity than Samoa but our development options are almost similar – narrowly funneled into only tourism and fisheries. Our cross to bear is energy. Despite more than 100 studies and reports on alternative and renewable energy since Independence we have, because of the limitations of size versus cost, been forced into extreme fossil fuel addiction. This is a massive drain on the country’s foreign currency reserves and has also resulted in a large carbon footprint.

“We should recognize climate change for what it is: a collective crime against humanity… its robbing island nations of their right to exist” said President Michel in a hard-hitting address at the opening of the SIDS meeting. I believe the President said this is not only because we could be wiped out by rising sea levels or increased storms, but because climate change is constantly reducing our natural capital and in turn our economic options. Reefs have died, affecting fisheries, dive tourism, coastal protection and sandy beaches. Increased rains lead to flooding affecting homes, industry and other infrastructure. Extreme droughts need to be managed through more water reservoirs, deployment of bowsers and critically, desalination plants. The investments needed to adapt to climate change and to protect against future impacts are immense. These moneys could have been better used for much needed development. And, that’s the point the President was making: scarce funds are being used to deal with problems that other countries have caused.

The Tyranny of GDP

Seychelles like several other island states have reached middle income status. This is great because it means our development trajectory has been the right one. But, paradoxically, middle income status has squeezed our options even more. President Michel outlined some of the challenges at the SIDS Meeting. The huge reduction of foreign aid is well known to many Seychellois who care to know about such things -our GDP per capita is supposed to be the highest in Africa and this has made us “graduate” from being a country that received foreign aid to one that doesn’t need this assistance any more. This is in itself a problem. But what most people don’t know is that the cost of running a government or a business in such a small country is very high. In other words the per capita cost to the economy is very high and most things we do become costly, many times uncompetitive, and sometimes prohibitive.

President Michel reached out to the rich nations on behalf of all SIDS this week requesting a “fair deal for SIDS”. Seychelles and other SIDS need to be treated differently than other nations by the United Nations and by bilateral partners. “Countries like Seychelles don’t need just aid…we don’t need handouts. We need access to development mechanisms that take consideration of our vulnerabilities” said the President. In fact the President is putting money where his mouth is, so to speak. Seychelles is a pilot country for a project funded by the UN and the EU to test a new tool called the Vulnerability Resilience Profile. This project will assist Seychelles to collect solid data and put in place indicators for the purpose of developing what is being called “beyond-GDP” measures that will be vital for Seychelles to make a case to donors for increased funding and other forms of partnerships.

For us to understand the reality of Seychelles and all SIDS we first have to re-orient the way we perceive these bits of land floating in vast seas. Seychelles is a Great Ocean Developing State (GODS) or Big Ocean Small State (BOSS). This may sound frivolous but its high time for it sink in (pardon the pun) that most of our country is made of ocean space. If the United Nations and rich countries only grasped this they would understand the challenges that a country with only about 50,000 people in its workforce faces to manage more than 1 million square kilometers of territory – an Economic Exclusive Zone (EEZ) that is bigger than France, Spain and Portugal land areas combined. But, with such a huge territory containing all kinds of riches, Seychelles can turn adversity into opportunities. Ocean-related resources and activities hold huge potential for the future and can leapfrog our tiny economy to the next level by creating new wealth for all through sustainable fishing, ecotourism, marine based energy production, new pharmaceutical products from marine animals and plants, ecosystem restoration and conservation, marine research and much more. What is now labelled the Blue Economy seems to be our future.

Partnerships for a Blue Society

To link people and the sea to become pioneers of a Blue Society is the next step. The ocean is the new frontier. But how do we go where few have gone before? Where do we get the resources needed? For us to become real GODS and BOSS we need to devise new ways of doing things and for living together. We are one of the 5 smallest sovereign nations in the world, with a diminutive economy, a tiny population, and distant from markets and knowledge centers. How can we make the Paradigm Shift first and secondly sustain the momentum both as a nation and as individuals? The government cannot do it alone. Neither can the private sector, nor civil society on their own. There are just not enough people and capital in any one of these “sectors”. The only way, is for us to forge genuine and mutually respectful partnerships and combine social and financial capital.

National Unity is the answer

We are not alone in this journey. Most SIDS share the same struggle. At the SIDS meeting it was Tommy Remengesau , the forward thinking President of Palau, who said “The future problems are not going to be solved by governments but by the private sector and civil society ”. But, Seychelles is polarized, with antagonistic relationships the norm rather than the exception. This divisive and sometimes corrosive situation we find ourselves in is holding us back, blinding us to our heritage, our potential, and in fact our destiny. We need Patriots who can put aside personal gain and differences. We need Innovators who look to the future and not seek to relive the past. Role Models who celebrate successes but don’t disown failures. Champions who create not imitate. Change Makers who are trouble shooters not trouble makers. Thought Leaders who are secure in their own skin but who can move out of their comfort zones. Where are those people? They can be found in the private sector and civil society. President Michel has made a personal step forward in creating the National Forum but it’s a leap for all Seychellois. The Forum is made up of private citizens, people of good will who have distinguished themselves as leaders and champions in their respective domains. Now it’s up to everyone else to step up.

Read 1115 times
Rate this item
(0 votes)
Tweet
More in this category: « Forum created to address tuna fishery in Seychelles Successful roll-out of Praslin coastal fishery plan is a disruption of the business-as-usual model »