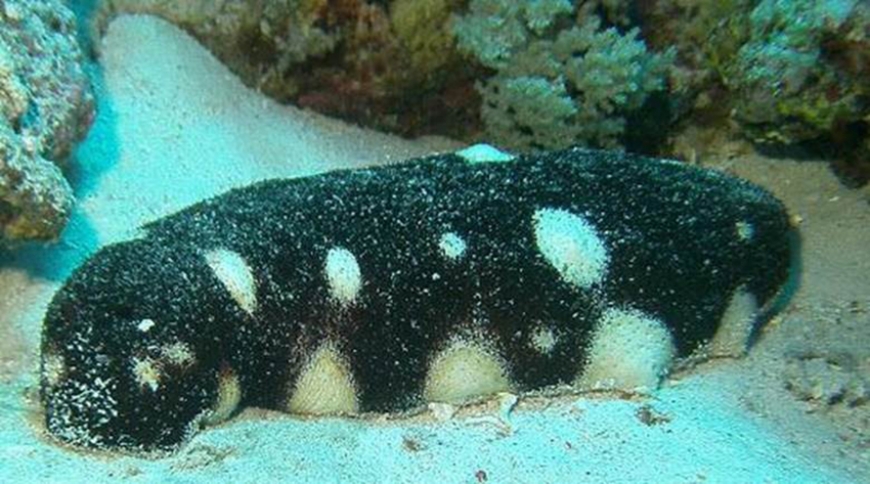 One of the species of sea cucumber proposed for inclusion in CITES Appendix II. Photo by Lesley Clements/Creative Commons
16 August

Three species of commercially exploited sea cucumbers are being proposed to be only traded internationally under special permit. The proposal, co-sponsored by Seychelles the European Union, Kenya, Senegal, and the U.S., will be considered at the 18th Conference of Parties (CoP18) of CITES in Geneva from Aug. 17 to 28. It intends to add Holothuria fuscogilva, H. nobilis and the endangered H. whitmaei to Appendix II of CITES.

Appendix II requires parties to issue export permits that confirm non-detrimental harvest of listed species, and requires importing countries who are Parties to CITES to check and monitor permits on incoming material.

Sea cucumbers have been harvested from oceans for hundreds of years as food. They are an important source of nutrition in Asia and their derivatives are also sometimes incorporated into medicinal products. They have an important ecological role, too, which is similar to that of earthworms. Their economic value and the ease of collecting them from the ocean floor without needing complex fishing techniques or expensive equipment makes them vulnerable to over-collection. Despite local protections and legal fishing stocks are declining fast.

The Seychelles Fishing Authority (SFA) says records show that sea cucumber harvesting and exportation in Seychelles goes back to the 1800s, according to a report in Today in Seychelles newspaper. Due to an increase in demand and higher prices offered on the international market, the fishery took off exponentially in the 90s. Initially fishermen collected sea cucumbers on foot but the fisher evolved to include divers in Scuba gear in deep water. They are dried and exported, with the main market being South East Asia. In 2002, 33,000kg was exported.
The Today in Seychelles report also says that for a long time it wa open access without management measures in place, but with increased fishing pressure and little to no information on the status of stock, the SFA introduced some measures in 1999. Currently, it is managed through a combination of measures such as open-closed seasons, fishing and processing licenses, quota on the number of licenses available, catch and effort reporting, quota allocation alongside a number of other measures. However this has not prevented the stock from declining. Fishermen have reported that every year, there are less and less sea cucumbers seen on the shoreline and it is harder to collect in deeper waters. Factors that contribute to the dwindling of the animal include unauthorized fishing, climate change, and piracy. Elisa Socrate of the SFA reported, "The stock is no longer a 'virgin stock'. The species changes its habitat as one of its innate defensive mechanisms and tends to gravitate to areas where it feels safe from predators, in this particular case, humans."

"This is a welcome move by our government. However, It is important to note that for Appendix II species it is solely the country of export that decides whether to issue a permit or not. Also a substantial amount of international trade in threatened species  is not monitored because exported material, such as dried bark and extracts, can be difficult to tie to particular species. This will be the case for sea cucumbers," Nature Seychelles' Chief Executive Dr. Nirmal Shah says.

Source: US Fish and Wildlife Service

(Edited to add additional reporting from A. Laporte Today in Seychelles 29/8/2019)