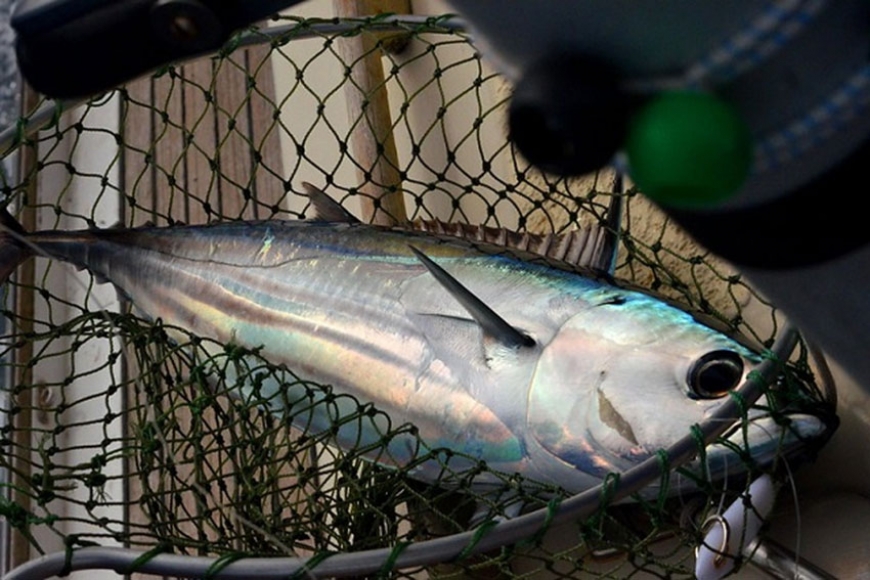 Yellowfin tuna in the Indian Ocean is currently the most overfished tuna stock in the world. (GrahamAndDairne/Flickr) Photo License: CC BY-NC 2.0
10 March

How much tuna? Seychelles, IOTC meets on sustainability of vital industry

(Seychelles News Agency) Seychelles joined 30 other member countries of the Indian Ocean Tuna Commission (IOTC) in a special weeklong session that began Monday to discuss the sustainability of fishing yellowfin tuna and to address deficiencies in the harvest control rule for skipjack tuna.

Yellowfin tuna in the Indian Ocean is currently the most overfished tuna stock in the world. In 2016, IOTC adopted a resolution reducing the fishing allowance of the species by 15 percent so as to help rebuild the population.

The European Union ambassador to Seychelles, Vincent Degert, told SNA that the EU strongly supports an effective reduction of catches of yellowfin tuna in the Indian Ocean to allow for the rebuilding and sustainable management of the stock.

"The EU proposes to share catch reductions among IOTC members in an equitable and fair way, taking into account the difference between industrial and artisanal fleets, the proportion of catches between small and big harvesters and the evolution of catches of the last years. The proposal explicitly excludes subsistence fishery," he added.

The chief executive of Nature Seychelles, Nirmal Jivan Shah told SNA that the fishing effort on the stock is 20 percent above the level at which the stock can be fished sustainably.

"Not having proper management measures will mean that the yellowfin stocks will continue to be overfished where the population will crash and the marine ecosystem and Seychelles will be the biggest victims," said Shah.

During the five-day virtual meeting, Maldives will propose that the overall yellowfin tuna catch in the Indian Ocean is reduced and maintained at 346,438 tonnes, as well as to reduce the role of supply vessels in purse seine operations to reduce fishing pressure on juvenile yellowfin tuna.

The European Union (EU), which operates a distant water fleet of 43 vessels, on its side is calling that catches be reduced to 403,000 tonnes. This represents a 6 percent reduction in catch of yellowfin based on catch levels of the benchmark year of 2014.

Degert said that the EU will further reduce its own level of catches, even though the EU is among the few IOTC members that have systematically implemented reductions in the last six years by approximately 22 percent.

Shah said that the threat is the over-reliance of the EU fleet on Fish Aggregating Device.

"They catch mostly juveniles which have obviously not reproduced yet. FADs as well as the supply vessels that manage them have to be phased out and Nature Seychelles has joined with over 100 organisations to call on the IOTC to take action against FADs," he added.

Shah outlined that experts, not-for-profit organisations and the tuna trade are saying there needs to be a 20 percent cut and that the EU proposal is actually a subterfuge because compared to 2019 it would allow it to fish more.

Ambassador Degert told SNA that any decisions taken should be based on the biological sustainability of the yellowfin tuna stocks conjugated with the economic externalities the fisheries sector generates in the economies of the coastal states.

Degert said that the EU wants to see a rebuilding and sustainable management of the fish stock.