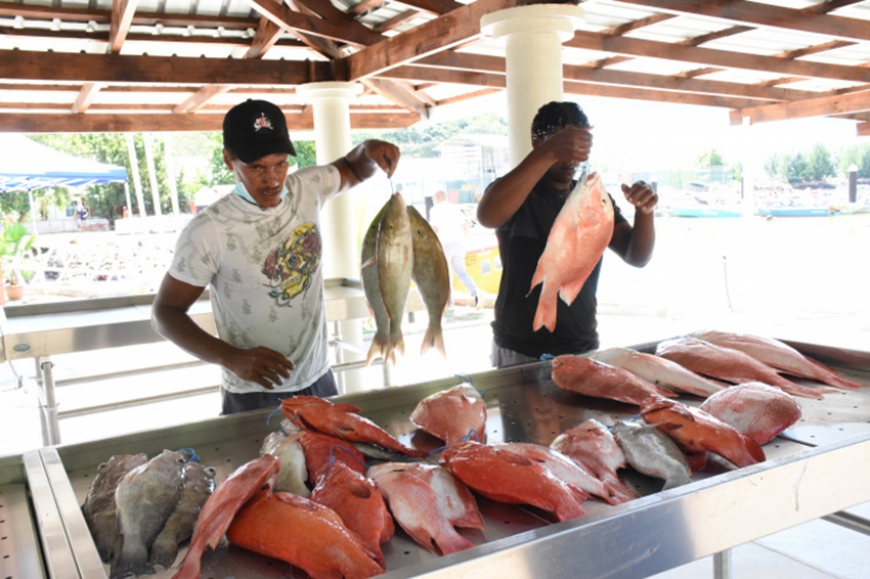 (Seychelles Nation 13.8.21) The Seychelles Fishing Authority is this year undertaking a total of six artisanal fishing related community projects, the largest number of projects ever tackled by the authority in one calendar year.

The six projects in the pipeline or already underway are in the districts of Baie Ste Anne Praslin, Glacis, Ile Perseverance, Cascade, Anse Aux Pins and Grand Anse Praslin.

All of these projects are being fully funded under the European Union-Seychelles Sustainable Fisheries Partnership Agreement (SFPA) which guarantees a total of €2.8 million – or over R40 million – each year for the promotion of sustainable management of fisheries in Seychelles and development of small-scale fisheries.

The EU-SFPA forms part of the larger agreement between Seychelles and the EU which allows EU fishing vessels to fish in Seychelles waters and which is revised every six years.

These fisheries projects will involve the construction of facilities such as fish markets, pontoons, gear stores and toilets for the benefit of local fishermen and customers who buy their fish from them.

SFA has already completed two similar projects at Bel Ombre and La Retraite for the fishing community in those two districts.

In tandem to the community projects, the SFA is also executing renovation works on its headquarters, opposite the Indian Ocean Tuna factory, and the reconstruction of the fuel depot at Port Victoria.

“Based on the government’s priorities, efforts are being intensified in regards to infrastructure projects to facilitate the lives of fishermen and supporting the fishing community, their livelihoods guaranteeing food security and also the sustainability of resources,” said the principal secretary for fisheries, Roy Clarisse, during a press conference yesterday.

Also present at the press conference were the chief executive of the SFA Nichol Elizabeth, chairman of the SFA Radley Webber, board member and chairman of the SFA’s investment committee Eugene Vidot, project manager at SFA Andrew Bristol and EU collaboration manager Nan Constant.

“SFA has a lot of projects on hand this year and we are taking these up with the seriousness it deserves. SFA’s board and the ministry [of fisheries] are following the projects closely to ensure they are executed on time and at the right cost,” said Mr Elizabeth.

“In the past, SFA had not been undertaking these many projects within a calendar year but now with our new chairman, PS and minister we have decided that things need to happen quicker. We need to use the fund under the EU-SFPA which is supposed to go towards the development of the industry and infrastructure; this time towards community projects and maybe next year it will go towards something else,” he added.

The largest of six community projects is the Baie Ste Anne fisheries project which will cost an estimated R22 million.

In its first phase, the Baie Ste Anne project will consist of the construction of a new market that will cater both to the sale of fish and farm produce, fish cleaning area, fish landing shed, gear stores for fishermen to store their equipment, conference room, gear shop, toilet facilities, pontoon installation and ice plant.

The second phase will see the installation of a fuel depot while the third and final phase will comprise an extension of the current jetty as well as excavation works to increase the depth for mooring.

“We undertook a visit to Praslin with the President and the President urged us to further develop the fisheries sector on Praslin. The site has already been chosen and everyone is excited because it is a huge project costing over R20 million[…]” stated Mr Elizabeth.

With the project currently at the tender stage, Mr Elizabeth went on to add that the SFA is prioritizing contractors based on Praslin for the project, since it will help the construction sector on the island as well as reduce expenses that could incur from having a contractor from Mahé take on the tasks.

However contractors from Mahé will be considered if those from Praslin do not show an interest in the tender or cannot meet the required standards.

It is expected to start in November 2021 and be completed in the space of a year.

It will cost around R10 million but this excludes the sea wall and purchasing and installation of the pontoons.

“Anse Aux Pins is one area where we had to reflect on a lot because Anse Aux Pins had already gotten two to three fishing markets, and they were not managed properly but in the end the board decided to invest in Anse Aux Pins and provide them with the facilities to help further the fisheries sector there,” said Mr Elizabeth.

“It will be a beautiful project that will be well integrated with the 2020 development project and the community. But we want Anse Aux Pins to form an association for its fishermen because right now it does not have one. Alone and without an association we do not believe things will run smoothly,” stated Mr Elizabeth.

Anse Aux Pins’ fisheries project kicked off on August 2 with RB Construction as project contractor and is estimated to be completed in a year.

The Cascade fisheries project is also scheduled to be constructed in the space of a year at an estimated cost of R5 million for the infrastructure only, excluding the purchase and installation of pontoons.

Already started since August 2021 with Qingjian International as the contractor, the Cascade project is scheduled to be completed by August 2022 and will consist of a fish market and fish cleaning area, fish landing shed, gear stores with toilet facilities and pontoons.

“Cascade is a district with very special characteristics – the fishermen are involved in different types of fishing, from tranp kazye to net fishing and demersal fishing. It had a little of everything which is why we decided to accelerate their project because they are currently operating in a compact area and the sellers are displaying the fish on pallets which they place on the ground. The risks of road accidents are great and we see that there are more and more fishermen using the Cascade facility,” explained Mr Elizabeth.

Cascade currently does not have a gear store for fishermen to store their equipment and engines, the district are being provided “with the maximum amount of gear stores possible”, according to the SFA chief executive.

A pontoon is also being installed to allow the fishermen to safely disembark their catch since they often had to wait for high tides to be able to get their catch off the boats.

“We will provide them with a pontoon they can use no matter if its high tide or low tide – there will be steps on the pontoon that will be useful during low tide so they can remove their fish and access their boats at any time,” detailed Mr Elizabeth.

Mr Elizabeth added that the SFA has received the cooperation of the Cascade fishermen association as well as a private landowner who has agreed for the setting up of a temporary fish market while the project is underway.

With these various investments in the pipeline, Mr Elizabeth noted that the SFA would like to see fishermen making good use of the markets instead of selling their fish by the road since it is not hygienic.

In Grand Anse Praslin, SFA is working to install a ice plant which can make up to 5 tonnes of ice but Mr Bristol noted that they have not received much interest for the construction of the slab area by contractors from Praslin.

Mr Bristol added that the SFA has also submitted a plan and is waiting for a response from the Seychelles Planning Authority for the construction of eight gear store units, toilet facilities and an office.

Meanwhile the project at Ile Perseverance is one which came to the attention of the SFA at the very last minute and a plan has already been submitted to the planning authority for the construction of a fish market, parking facilities and pontoons.

“We had already started the project but we received a notice to halt the construction since our plan had yet to be approved. Concerns have been raised by the land transport department that is not agreeing with our parking facility,” added Mr Bristol.

The fish market will be situated next to the Ramajayam supermarket and is being constructed with the aim of moving the fish sellers to a more hygienic area than simply selling their fish by the roadside.

Contracted out to BCCL, the project at Ile Perseverance will cost R450,000 with duration of six weeks.

At Glacis, the SFA has had to scale down its fisheries project to only include a fish market and a chiller room due to limited land. It will cost an estimated R600,000.

The SFA has negotiated with the Mancham family to acquire a parcel of land nearby to construct around 12 gear stores for the fishermen.

As for the reconstruction of the fuel depot at Port Victoria, SFA is working to demolish the depot and set up a temporary depot with the assistance of Seypec until the construction is completed.

The new fuel depot will also include offices for security guards and the depot’s operator.

Now on tender, the fuel depot is scheduled to start in about a month’s time and will cost R2.5 million, added Mr Bristol.

Due to issues relating to fungus, SFA’s headquarters is also being renovated at a cost of R8 million and is expected to be ready by mid-next year.

In the meantime the SFA is operating at the Espace building.