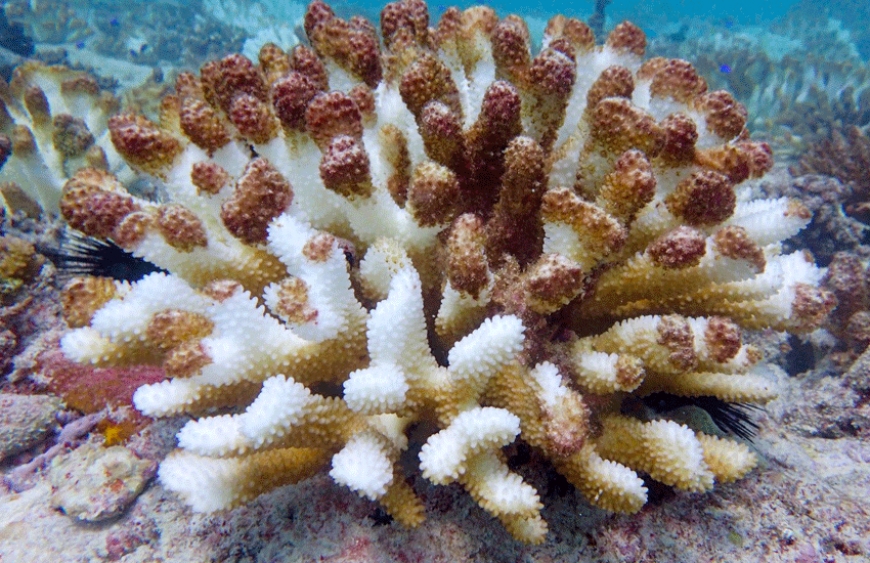 The status of coral reefs after the recent bleaching event

In December 2015, Nature Seychelles’ Reef Rescuers team launched a Bleaching Response Plan consisting of: Predictions of bleaching risks from surveillance of seasonal temperature forecasts; Ecological impact assessments before and after the bleaching event; Communication to the media and online networks; Reporting bleaching impacts to groups of experts such as CORDIO East Africa

The Reef Rescuers team undertook weekly monitoring on the transplanted reef and control sites within Cousin Island Special Reserve as well as Les Parisiennes reef; used as a donor site for the 2010/15 coral reef restoration project.

The first signs of bleaching were recorded in March. Bleaching intensified by the end of April and reached its highest in May. On the second week of May, bleaching declined as a consequence of dropping water temperatures.

With many reefs still bleached globally, experts predict this mass-bleaching to persist until the end of 2016, making it the longest in recorded history.

No accurate impact assessment can be done until bleaching has completely withdrawn - it is still too soon to estimate the impact of this year’s bleaching event on the restored reef on Cousin Island Marine Reserve. Time will tell whether these bleached colonies will shift towards recovery or eventually succumb.

The restored area after the peak of the bleaching event. Cousin Island Special Reserve, Seychelles

A bleached coral continues to live; but without its colorful symbiotic algae it loses 90% of its energy source and become extremely vulnerable to disease, predators and invasive organisms like seaweed and sponges. If temperatures drop soon enough, the coral can regain its algae. However, if the thermal stress persists the colony will starve to death.

Corals are in fact colonies of smaller organisms, called polyps. If harmed, the colony is able to regenerate from just a few living polyps. A number of colonies were recorded as “partly dead” where part of the colony is covered with algae but the rest are still alive and recovering. The Reef Rescuers team hopes that these particular colonies will regenerate their tissue and resume growth.

Coral reefs are important for food, coastal protection and livelihoods. The reefs of Cousin Island Marine Reserve exhibit healthy populations of fish. High densities of rabbitfish, surgeonfish and parrotfish can be observed grazing the reef. Widely present on the transplanted site, these herbivore fish are key to the recovery of the reef as they will keep algal growth in check and indirectly help surviving corals to grow. Their very presence is already a big step towards recovery.

The arrival of new coral recruits (baby corals of less than 5cm in diameter) on the reef is also paramount to full recovery. The observation of many coral recruits on the transplanted reef is a comfort to Nature Seychelles’ Reef Rescuers team in their high expectancy for recovery on this site.

Overall, natural processes along with the appropriate management currently in place around Cousin Island Special Reserve should drive the ecosystem back to its healthy state.

Read 15069 times Last modified on Wednesday, 27 July 2016 06:16
Rate this item
(0 votes)
Tweet
More in this category: « Seychelles project chosen as an African Blue Solution Bad for your health but great for conservation »