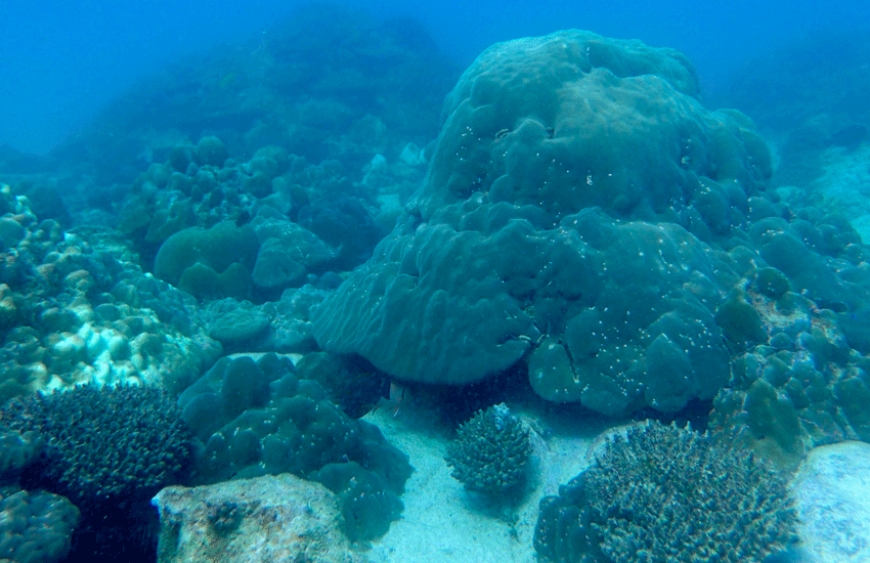 After the devastating effects of the recent bleaching event on our coral reefs, the time has come to look for survivors and get on the road of recovery.

On the Northern side of Cousin Island Special Reserve, a reef designated as Porites Sanctuary is showing interesting patterns of survivorship. This area displays an unusual number of Porites lobata. Porites are a type of hard corals common in the Seychelles. They can be encrusting, digitate (finger-like morphology) but their most impressive growth-form is the mounding type, taking the shape of a rock and growing to phenomenal sizes like the species Porites lobata.

Those living mountains have been estimated to cover 40% of the reef at Porites Sanctuary. The Reef Rescuers recently dived this site to survey the extent of coral mortality after the deadly bleaching event. Most branching corals of the genus Pocillopora and Acropora were dead but the Reef Rescuers were enthusiastic to observe minimum mortality among Porites with most of the colonies recorded as healthy or recovering.

These results highlight the tolerance of the genus Porites to heat-related stress. Moreover, being relatively slow growing (Porites lobata reported growth rate is between 8 and 19 mm/ year), the presence of colonies as wide as 3m account for this species resilience through time. Some colonies at Porites Sanctuary could be over 300 years old!

Because of their slow growth, Porites have been overlooked in the husbandry industry. However, in the context of coral restoration, out planting Porites on a degraded area could provide it with significant long-term 3D complexity.

With climate change and an increasing frequency in mass bleaching events, Porites may survive better through time than other less resilient branching coral species.

Some recent studies show how to accelerate the growth of Porites through micro-fragmentation and fusion. The Reef Rescuers will soon test these new techniques to pursue the successful rearing and out planting of this “super coral” in their next restoration phase.