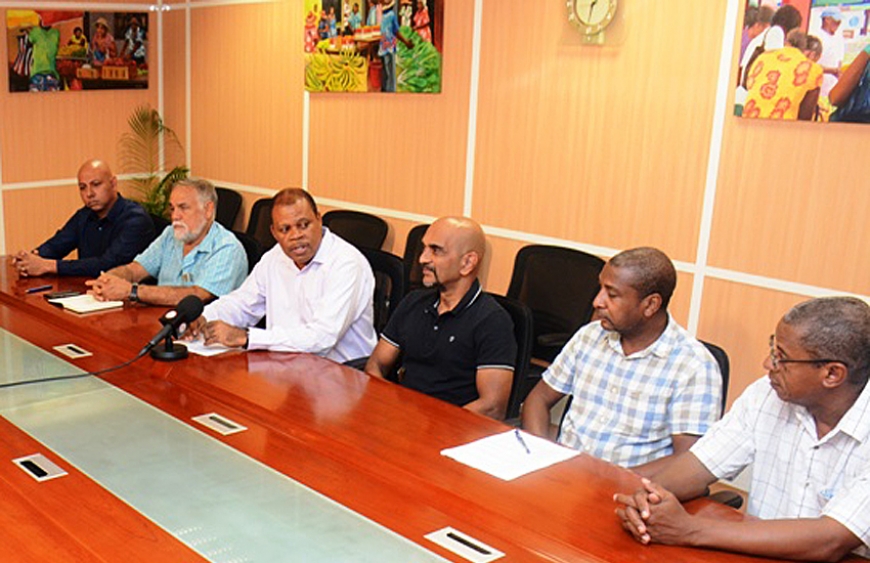 Representatives from the Seychelles Fishing Authority (SFA), Fishing and Boat Owners Association (FBOA), and Indian Ocean Tuna (IOT) company, headed by minister for Agriculture and Fisheries, Michael Benstrong, took a stance at last week’s IOTC meeting in Indonesia requesting that the reference year used to calculate the 15% quota on yellowfin tuna be the year 2015 instead of 2014. They have been fighting for this because of the negative socio-economic impacts it may have on the country if the year 2014 was used.

In addition, they also were victorious in imposing a reduction on the use of FADs and supply vessels by European countries which have an interest in the Indian Ocean.

As for supply vessels, Seychelles managed to “close a loophole”, as Minister Benstrong puts it, to ensure that only one supply vessel be used to service two purse seiners of the same flag state.

“Some states were moving their quota to other countries, which means they were fishing a lot more than they should have and more than was recorded officially - meaning that this put a strain on the amount of yellowfin tuna in the region,” he explained at yesterday’s press conference. “We have now closed that loophole.”

The group says they received much support from the coastal regions, namely Mauritius, Maldives, and even South Africa, which all proposed similar motions at the IOTC conference last
week.

The Seychelles delegation asked these countries to join them and together they drafted one paper, which had more impact on the larger states.

Explaining what had to be said in order to sway such large nations, an economist from the Central Bank, Trudy Lucas, explained that a research paper had to be put together to show how
the fishing industry would have been hurt if 2014 had been used as the year for the quota, and why it would be unfair to put such a cap on this small island state without imposing the same kind of cap on larger states.

“In 2014 we had less fishing because of piracy in our seas,” she began. “In addition to that we had to outline how a number of our sectors would be affected economically - SEYPEC gives fuel
to the boats so if they stop operating... Same thing goes for the cold storage facilities that would be empty if we stop fishing, not to mention the many employees of IOT.”

Chairperson of the SFA Dr. Nirmal Shah added that “…socioeconomics doesn’t necessarily sway big nations so on top of that we have to explain the vulnerability of small island states, namely Seychelles. This is not just about our livelihoods but about something that has a cascading effect on many other sectors.”

Minister Benstrong notes that they will be “relying on trust” to ensure that those European boats fishing in the Indian Ocean do not break their pledge to reduce the use of FADS and supply vessels. He, however, indicated that in the near future there will be capacity to have observers monitoring the ocean and each vessel in our zone.

Keith André, who is on the board of the SFA and FBOA, stresses that his stance was and remains "the complete ban of FADs,” he stresses. “Maybe we are a bit harsh on that but as we continue to negotiate and see what is best for our oceans there is no reason why we cannot reach that stage one day.”

It should be noted that discussions to reduce the amount of fishing in the Indian Ocean, and the devices and systems that assist in fishing, centred on putting a cap by 2020. However, due to the urgency and pressure from various fishing stakeholders, Minister Benstrong says that “now is the time to start putting pressure on those who overfish and to take back our role as leaders in sustainable fisheries.”

As at end of April 2017, statistics from the SFA show that 11,000 tonnes of yellowfin tuna have been fished. But the first three months of the year are the most favourable for fishing. Usually the catch reduces as the year goes on. Special adviser to the minister, Roy Clarisse, mentioned that “if we kept the reference year as 2014, by next month we would have had to dock our ships.”

He indicates that a meeting with fishing stakeholders will take place by the end of the month to assess where we are on the quota system, and to communicate in an effective way on the outcomes of the meeting in Indonesia.