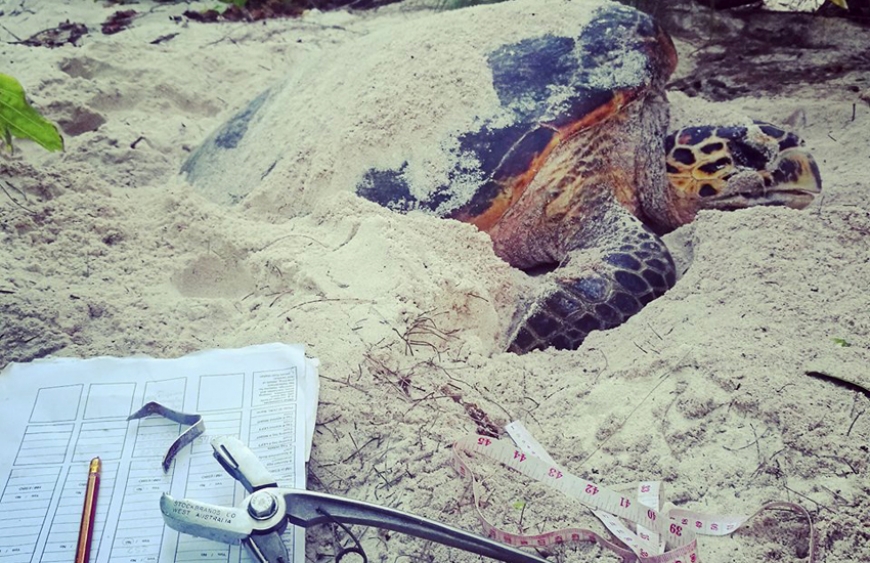 This is my third time on Cousin Island during turtle season. You would think that after spending so much time watching turtles nesting I will have seen most of what there is to see but no, every time I come, there is always something new, something I haven’t witnessed before.

Just this week, I was sitting on the beach on the last patrol of the day watching a turtle digging her egg-chamber. I was waiting for her to begin to lay her eggs so that I could count her clutch and read her tag numbers. All of a sudden I noticed small dark shapes moving just behind the turtle, I thought to myself “those skinks look really strange” until I realized they weren’t skinks at all, they were lots and lots of turtle hatchlings emerging from the forest behind the laying turtle.

The hatchlings came up right behind the digging turtle, in their rush to get to the ocean they clambered right over her flippers and her carapace. Many of them fell into the egg chamber she was in the middle of digging!
With all this movement over her skin the adult turtle got spooked and started making her way back to the ocean with no signs that she recognized the hatchlings as babies of her own species. Eventually the wave of hatchlings made it out of the nest and made their way down to the ocean in the tracks of the adult.