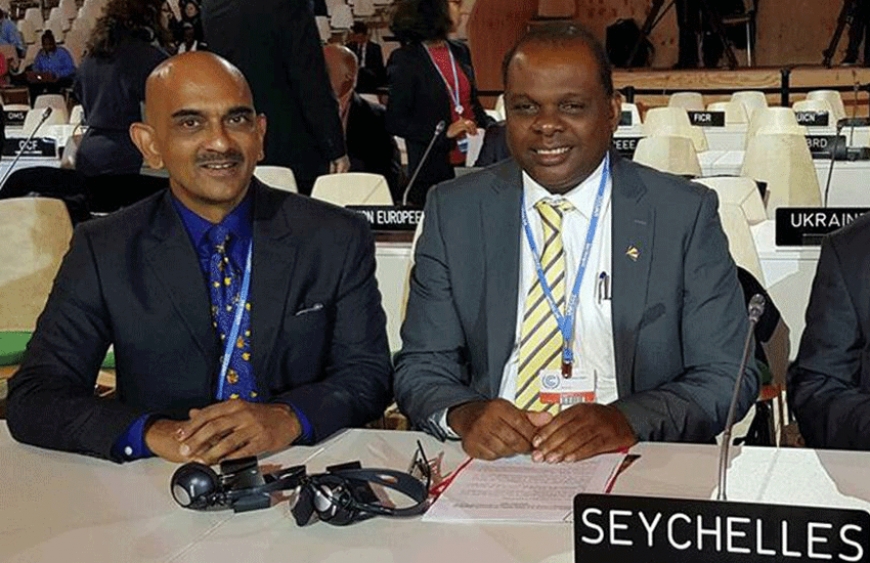 The coral man of Seychelles

Nature Seychelles CEO, Dr Nirmal Shah has been named Indian Ocean Hero in the latest issue of New African Magazine. In the article titled “Africa’s Indian Ocean heroes and climate change” the writer highlights that Africa is especially affected by climate change and specific issues need to be addressed in the ongoing climate talks in Paris, the Conference of Parties (COP21). Shah together with Dr. David Obura and Mohammed Ali Baddi of Kenya, are named Indian Ocean heroes for their passion and years of work in conservation in the region. This issue of the magazine is a special issue focusing on COP21. Shah, in his capacity as a special envoy is in fact part of the delegation representing Seychelles at COP21.

Further out into the Indian Ocean, in the Seychelles, Nirmal Shah traces his passion for the oceans back to the time he was barely 13, in 1972. It was then that he accompanied his late father Jivan Kantilal Shah to the first Western Indian Ocean marine sciantists’ summit in India.

“There were no planes at the time,” Shah recalls. “It was a sea voyage and we had to connect through Mombasa – the main port of East Africa – before proceeding to India. The Journey took a week.”

Shah has never forgotten the experience and regales it with nostalgia, as if it happened yesterday. The event marked his initiation into marine conservation long before he had reached the age of consent.

“Right from my young days my father ensured I interacted with top scientists and marine researchers who came to the Seychelles for their research,” Shah recalls. “My father owned boats and as he hired them out to scientists for weeks, I found myself tagging along. Eventually marine science and the importance of marine protected areas rubbed off on me.”

Shah on the way to Cousin Island Special Reserve

Today Shah heads the environmental not-for-profit, Nature Seychelles, which manages the 25ha Cousin Island Special Reserve, a marine protected area and one of the 115 islands that make up the Seychelles archipelago.

Cousin is at the centre of combating climate change, species survival and conservation in the Western Indian Ocean rim. It has been an avian sanctuary since 1968 and acts as a breeding ground for sea turtles. Lately Shah and his team of ‘Reef Rescuers’ have turned the marine reserve into a conservation hotspot attracting many in their labour-intensive undersea venture which seeks to reverse the coral bleaching of 1998 through coral reef planting.

“We started this project five years ago,” Shah says. “We have grown corals from scratch and lately we have been transplanting them from garden nurseries to the actual restoration sites. The nursery phase has been a success, because we grew more corals than we expected.”

According to the US National Oceanic and Atmospheric Administration (NOAA), the global benefit accruing from corals stands at $29.5 billion annually. Around 500 million people rely on corals for food, livelihoods and even coastal defence.

“So far the results are encouraging. In the next three years we expect to see the whole ecosystem (structure) taking shape and that is when we will have full answers and directly involve the community owing to the lessons learned,” Shah says. “It’s a long-term problem-solving process with a lot of hours undersea and there are no short cuts. However, it is very fulfilling to see corals growing again.”