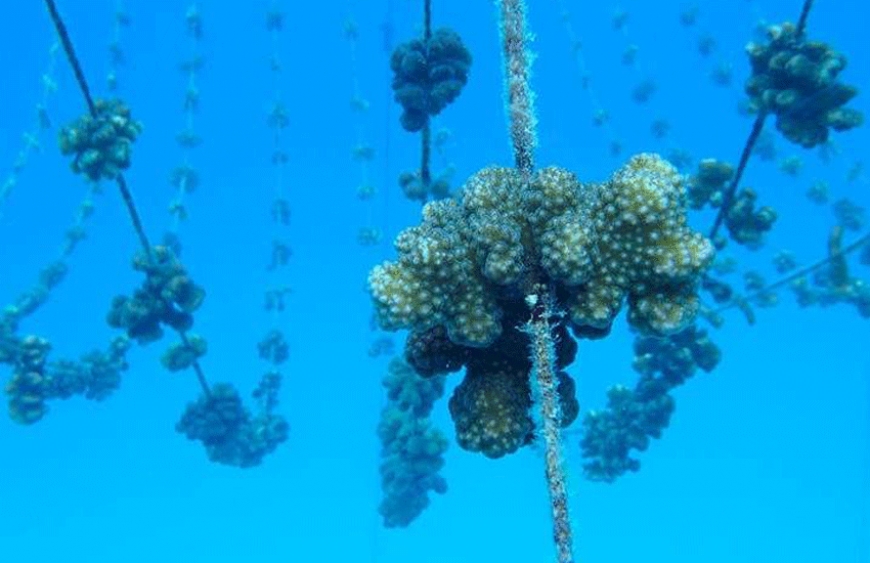 Eager to get back to our coral babies

It can be difficult to tear oneself away from infants for an extended period of time, but the much needed R&R from their constant daily demands can make the homecoming gratifying. Nature Seychelles’ Reef Rescuers team Louise Malaisé and Austin Laing-Herbert had to temporarily leave their underwater coral family to spend time with their real families over the festive season. Louise, the Technical & Scientific Officer tells us about the worries they had on leaving, how keen they were to get back to their coral nurseries and what they found on their return.

Reef Rescuers is a USAID-GEF funded project by Nature Seychelles which was started in 2010 with the aim of restoring coral reefs following the global coral bleaching event of 1998 and later 2004. The project uses underwater nurseries to grow “designer” corals that are later transplanted to areas where coral reefs have been massively destroyed. The reef Rescuers team has so far transplanted corals to an area the size of a football field.

You just recently came back after several weeks away on holiday, did you leave someone in charge of monitoring the coral nursery?
Yes, we had a four week leave during which time Cheryl Sanchez, Nature Seychelles’ Science coordinator who is based on Cousin Island, kept an eye on the coral nursery once a week.

When you came back were you eager to dive right back in and check on the corals yourself?
Of course we were very anxious to check on the nursery after being away for all that time. Having collected coral fragments in the wild and stocked them one by one in the nursery, we feel responsible for them. However, we had to wait another week before diving in order to do some repair work on the Reef Rescuers boat.

Were you concerned in what state you may come back to find the nursery without the regular monitoring and cleaning work which you normally carry out?
We were confident to leave the coral fragments uncleaned for a period. Also, December to January can be a period of rough seas but we made sure all anchor points were secure before leaving. Our main concern was growth of algae, and barnacle and sponge settlement.

On a healthy reef, algae are kept in check by natural underwater ‘helpers’ like parrotfish, rabbitfish and surgeonfish. Our underwater coral nursery is located away from the seafloor to have as much light as needed, reduce smothering by sediments and to avoid destructive fish like the hump-head parrotfish. The downside to this is that the nursery may not benefit from the natural cleaning by these fish. Overgrowth of algae can cause early death of coral fragments.

What were some of the changes you noticed in the coral nursery?
In one month all corals grew well, and a few died of natural mortality. As we expected, we came back to a nursery covered by seaweed and barnacles but nothing dramatic. All in all, the corals did pretty well without supervision but nursery-cleaning is still paramount at least once a month to avoid contamination by other organisms.

After a month away, you came back to find coral fragments that are now ‘grown-up’ coral colonies, does this mean they are at size that is ready for transplantation?
Some coral colonies have grown to a size ready for transplantation, but we are waiting for the calm season between September and November 2017 to transplant them. However, most are still too small to transplant. The bigger they are, the better their chance of survival.

In the six years that the coral reef restoration program has been running, there is continuous monitoring work not just on the nurseries but also on the transplantation sites; once transplanted, isn’t nature just let to run its course?
This Reef Rescuers project is also concerned with collecting precious data on what coral reef restoration can achieve for instance increase in fish populations, and on commercially important types of fish; response of transplanted corals to natural disturbances such a mass-bleaching events and so forth.

For the Reef Rescuers project, nursery-grown coral colonies did not need any human intervention after being transplanted. We monitor how colonies do in the wild and how they benefit the marine ecosystem of the area to which they are transplanted.