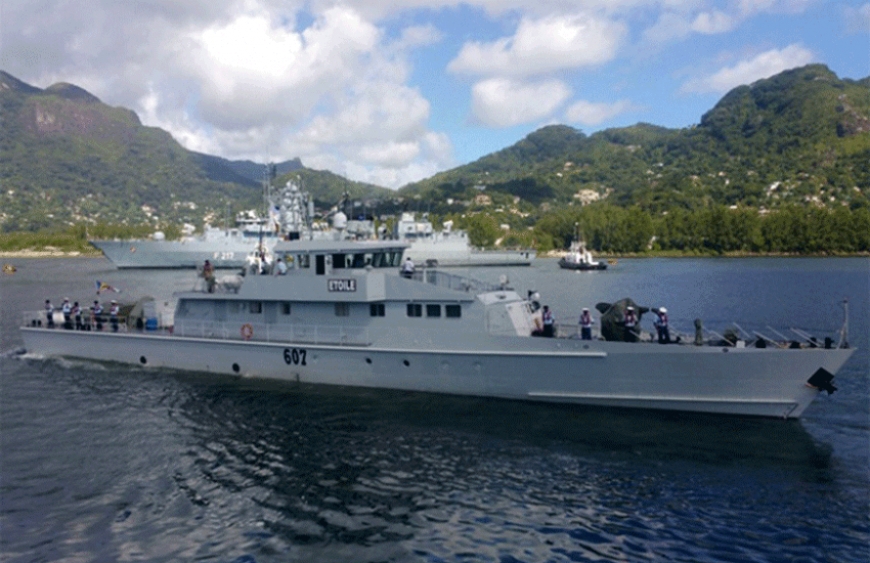 File Photo: Coast Guard Vessel 'Etoile' out at sea. The Seychelles archipelago in the western Indian Ocean has an exclusive economic zone of 1.3 million square kilometres around its 115 islands, a fact that makes detection of irregular and unlawful activities difficult. (Seychelles Coast Guard)

(Seychelles News Agency: 22 March 2016) - Seychelles is now better able to safeguard its waters with the installation of a coastal surveillance radar system officially inaugurated on Monday, the minister of foreign affairs said. The project has been implemented with the support of the Indian government.

The Seychelles Minister for Foreign Affairs Joel Morgan said the system will help the Seychelles Coast Guard and the Seychelles People’s Defence Forces get a better maritime picture of part of the country's Exclusive Economic Zone (EEZ) waters.

“This new surveillance system will allow us to coordinate better our response to any illegal, unreported and unlicensed fishing activities in our EEZ and ensure that merchant and shipping traffic respect their areas of navigation while transiting our waters,” said Morgan.

The Seychelles archipelago in the western Indian Ocean has an exclusive economic zone of 1.3 million square kilometres around its 115 islands, a fact that makes detection of irregular and unlawful activities difficult.

Morgan added that the detection of unidentified maritime targets and real-time monitoring will reduce substantially the cost of the air and sea searches conducted in the past.

The surveillance system is comprised of six radar stations based on five different islands: Mahe, the main island, and Alphonse, Farquhar, Astove, and two on Assumption.

The system is coordinated and managed by a central station based at the Seychelles Coast Guard under the leadership of Lieutenant Colonel Leslie Benoiton as director of operation.

“The centre based here is where all maritime information comes in. It is a system where we continuously gather maritime information. We also receive contact from boats transmitted automatically when they pass our region, especially near Aldabra, which is a very sensitive area,” said Benoiton.

Benoiton added that the data received are analysed to determine if there are any irregularities in the Seychelles maritime zone.

“If there are irregularities, we raise the respective boat on radio or aerial communication and we question them on their whereabouts. It also helps us to identify boats which do not have the Automatic Identification System (AIS) and we use the cameras to zoom in and see exactly who they are and then we take decisions accordingly,” said the director.

The inauguration signalled the completion of a project launched in March 2015 by the Indian Prime Minister Narendra Modi during his visit to the Seychelles.

Visiting Indian minister of state and defence, Rao Inderjit Singh, said the project is a testimony of the strong bond of friendship between the two countries that has not only stood the test of time but has deepened over the years.

“Designed to secure the sea lanes and safeguard the extensive EEZ of the Seychelles from various offenders, it has indeed taken our partnership in the field of defence and maritime security to a new level,” said Inderjit Singh.

The Indian minister visited the radar stations at Alphonse on Monday morning and gave his impression during his inauguration address.

“I was impressed by the state of the art technology in place,” he said.

Seychelles minister Morgan said the completion of the project is a testament of the government’s unwavering commitment to further secure the country’s EEZ.

“Securing our waters is of utmost importance at this time as we are working towards implementation of different projects in the field of maritime security under the Blue Economy agenda.”

More in this category: « Debt swap to boost conservation More accurate and reliable ocean forecasts for Seychelles »
back to top