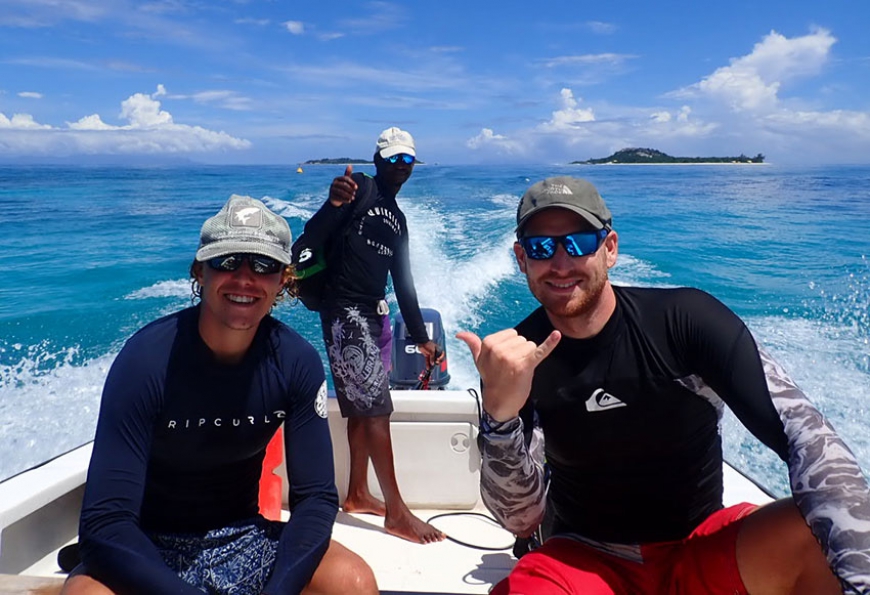 "3, 2, 1…let’s go,” says Paul, one of the Technical and Scientific Officers for Reef Rescuers, as he signals we are ready to dive.

The month of May was dedicated to transplanting colonies of Pocillopora spp. that had been growing on the underwater nursery next to Cousin Island for over 12 months.

To prepare we mixed marine cement that can hold these colonies in place on the reef until they are able to grow onto the substrate and self-attach. While I have worked with cement before, I was pleasantly surprised to find out how Paul and Chloe prepare the cement. After mixing in the water and working it around, punching and pushing the cement until it is the perfect consistency, you are ready to go 12 rounds in the boxing ring. Cementing the colonies to the substrate is pretty simple but requires a steady hand and better yet, good buoyancy. As we wrapped up this period of transplanting suitable colonies, I started to see changes all around the reef from Damselfish starting to colonize their new homes to Butterflyfish investigating a new source of food. 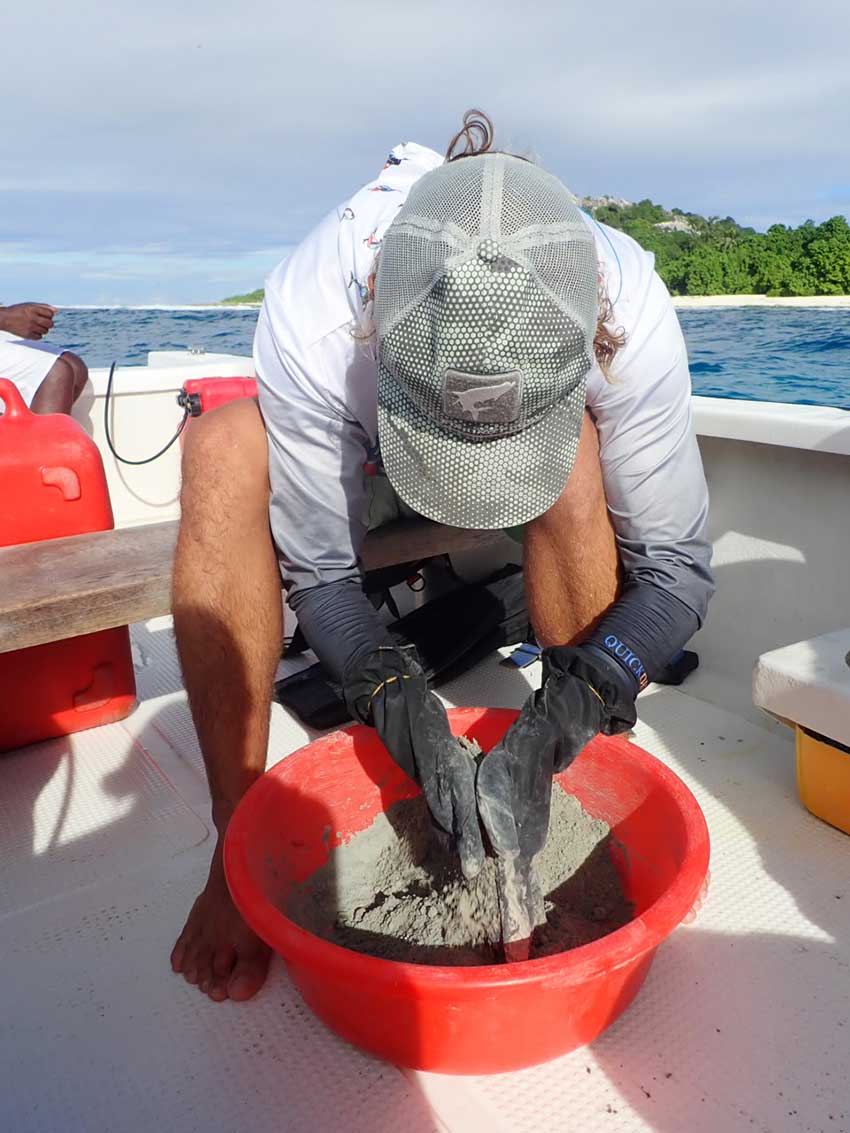 After wrapping up, we directed our attention to ensuring next season’s colonies are healthy by cleaning the nursery off of Cousin Island.

Cleaning a nursery involves good buoyancy, steady hands and most importantly, attention to detail. Each colony is spliced onto the line where it grows steadily over a year and the aim is to make sure as many colonies survive to be transplanted. While disease is a major issue in farming corals in the Caribbean, I was surprised to see the majority of colonies on this nursery showing overall good health. To give them a fighting chance, we made sure to clean off any bits of algae and macroinvertebrates that were growing on either the rope or the colonies themselves. We used a toothbrush and a butter knife for pesky barnacles. 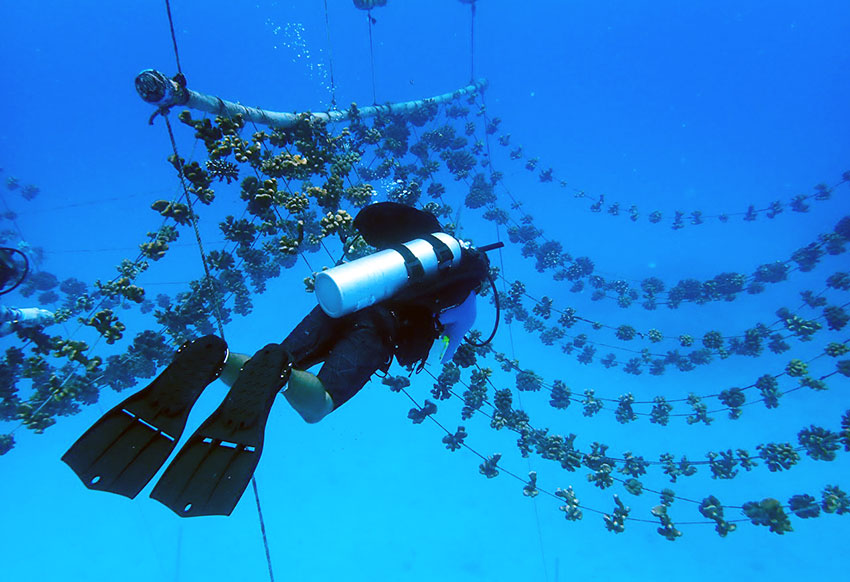 Next, we shifted our focus to another island - Cousine. The Reef Rescuers monitor the reefs to assess their ability to donate coral fragments for the ongoing restoration project at Cousin.

We conducted a series of surveys including recruitment, adult and juvenile coral densities as well as benthic, fish and invertebrate counts. Putting all of this data together gives the best indication as to the health of the entire ecosystem.

The highlight of this monitoring was an unexpected guest on one of our last days of monitoring.

Our skipper, Jacques spotted something large off of our bow and our eyes immediately begin scanning the surface. At first, it seemed as if the large granite boulders on the bottom were playing tricks on our eyes until the figure moved towards the surface.

“Whale Shark!” Paul and Chloe yelled and we put our fins on and joined this gentle giant for a snorkel. This was my first-time swimming with one of these beautiful animals in the wild. At around 7 metres it was still in its early stages of life. 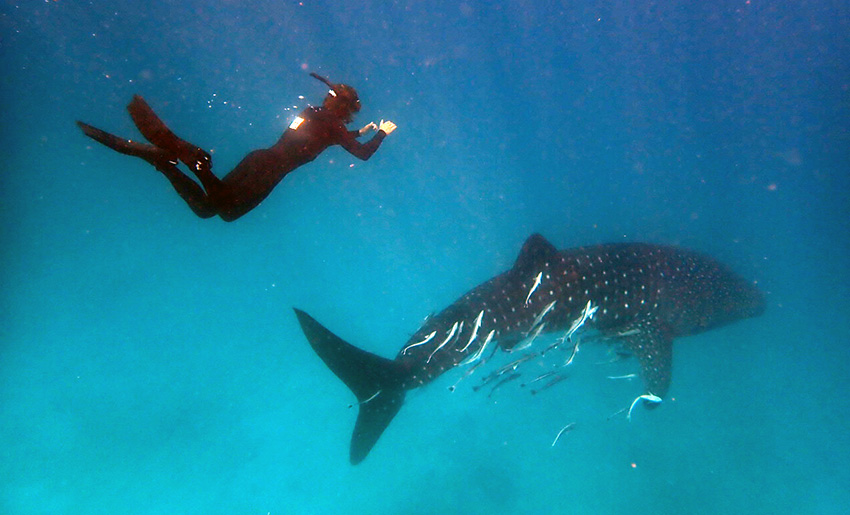 As my time with Nature Seychelles came to a close, I couldn’t help but think what the future of conservation holds for such a unique and progressive country like the Seychelles. There will always be a need for projects such as the Reef Rescuers. Being able to see and understand the diversity of life that the Indian Ocean holds has been a rewarding experience and one that I plan to implement into my fisheries science graduate studies.

Sam Cheplick was a volunteer with the Reef Rescuers for 3 months.