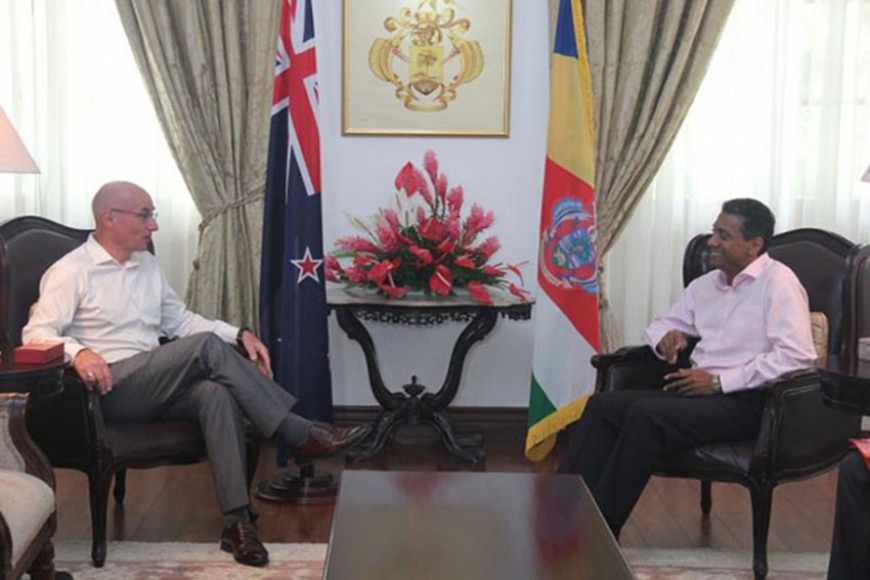 Ramsden said that the Commonwealth is important for both countries as it provides Seychelles and New Zealand with lines of work they can cooperate on closely (Patrick Joubert, Seychelles News Agency)
07 August

Mark Ramsden presented his credentials to the President of the island nation, Danny Faure, at State House.

After the ceremony Ramsden said that the Commonwealth is important for both countries as it provides Seychelles and New Zealand with lines of work they can cooperate on closely.

“One is under the Commonwealth's Blue Economy Work as this works around ocean acidification. It is a huge issue for small island nations and particularly those with coral reef dependent economies,” said Ramsden.

Seychelles and New Zealand have shared diplomatic ties since 1992 and Ramsden said that the two countries have a lot in common, both being oceanic island nations. He and the president discussed some of the challenges that small islands are facing.

“Looking forward, we see countries such as Seychelles as being really important partners for us in addressing climate change. Cooperating around climate change as being very important and some of those related issues, such as ocean acidification, are equally important too for small island states,” said Ramsden.

The high commissioner shared that there is legislation in the New Zealand Parliament to make the country carbon neutral by 2050. He added that “Commonwealth countries share a lot of systems, institutions and values.”

In a press release from State House, Faure “noted how the government of Seychelles greatly values all the support and assistance received from the government of New Zealand in various fields and expressed his fervent hope that during High Commissioner Ramsden’s tenure, the bonds of friendship and cooperation will be further enhanced.”

He further acknowledged New Zealand’s cooperation in the field of education, an area which many Seychellois students have benefitted from.

Ramsden is the third high commission of New Zealand to Seychelles – a group of islands in western Indian Ocean and he is based in Addis Ababa, Ethiopia.