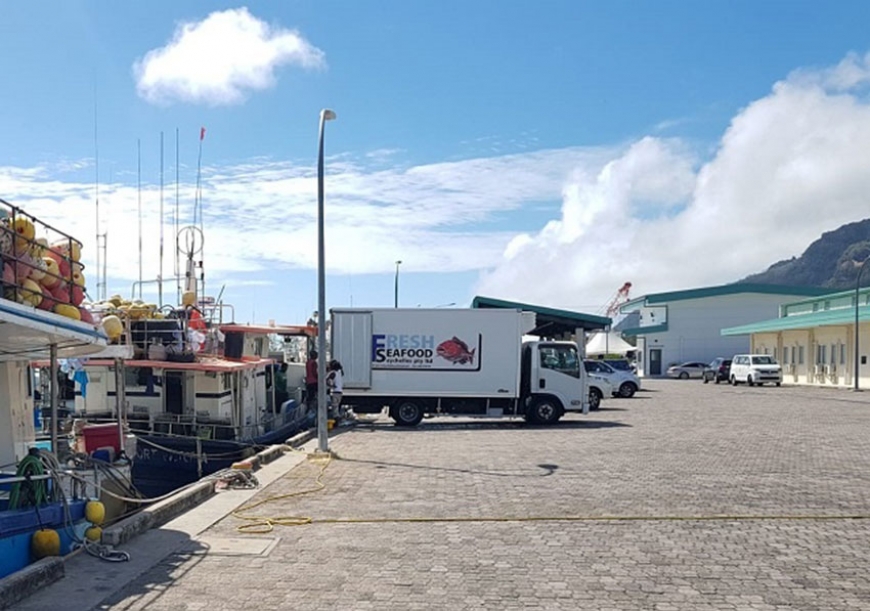 The completed phase two includes the expansion of 216 metres of quay, ten mooring buoys, a landing shed and a ten-tonne ice-making facility among others. (Seychelles News Agency)
10 September

“This project will directly improve the work efficiency of fishers and boat owners, improve the safety of vessels and fishers at the Providence and Victoria ports and will help to reduce congestion and optimise the supply of ice for fishers,” said Vice-President Vincent Meriton.

The second phase was needed due to the increasing catch by artisanal and semi-industrial fishermen, who had a lack of access to an ice plant, ice storage warehouse and other fishing facilities.

A fisherman, Macdonald Issac, onboard an artisanal fishing vessel, ‘Espadron”, said that the facilities are good and will benefit all fishermen. The facilities are located at the Providence Industrial Estate, about three kilometres south of the Seychelles' capital, Victoria.

“I hope that the areas where vessels are loaded and unloaded will remain free and not blocked, to facilitate us. Before that, there was only one and with the introduction of a second loading and unloading area, hopefully, things will get better,” said Issac.

Seychelles, a 115-island nation in the western Indian congestion.xperienced industrial-level ice shortages in the past with fishermen frequently expressing their frustrations.

Talking about the opening of the new ice plant, Issac said that at the moment he cannot comment on if the problem will be elevated.

“At the moment we are in the South-East Monsoon, the sea is rough and hence not many vessels are going out to sea. We will be in a better position to understand if the ice problem has been resolved once the North West Monsoon (December to March) starts,” said Issac.

Fisheries is the second biggest contributor to the country’s economy and due to this the Japanese team has made a strategic decision to focus their Overseas Development Assistance in this sector, said the Deputy Chief of Mission, Yoshihiro Katayama.

“I have been informed that a number of seafood processing factories are expected to be constructed in the near future,” said Katayama.

The fisheries industry of Seychelles has benefitted over the past three decades with numerous projects from the Japanese government.

Meriton said that the project “is a testimony to the significance of diplomatic relations between Japan and Seychelles.”

The project, which started in 2016, affirms the government’s commitment to supporting the semi-industrial and artisanal fishery, in line with the Strategic Plan of the Ministry of Fisheries and Agriculture.

“This is to facilitate the provision of appropriate physical and institutional infrastructure, in order to attract investment and to promote food and nutrition Security for the country,” said Meriton.

He added that it will help diversify the economy, create jobs and improve the value chain for local fisheries products, echoing the goals of the National Blue Economy Strategy and Action Plan.

The project is an extension of the first initial project for the construction of a quay which was completed in 2010. It took two years to complete the first Phase One of the projects.