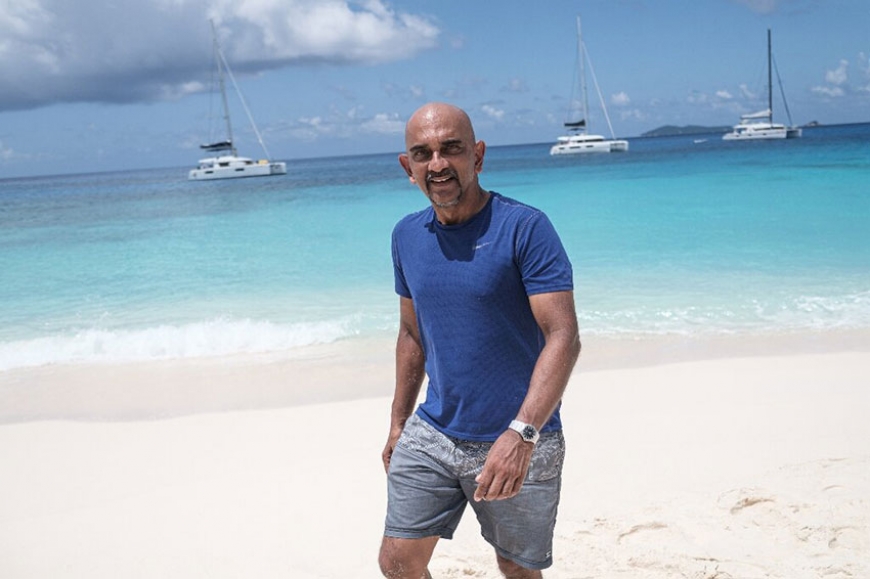 AFP: In Seychelles, nature is prized above mass tourism

(AFP 16 January 2020): In a shady patch along a pristine white beach on Mahe Island, a radio spits out reggae and snapper sizzles on the barbecue, as Seychelloise Nareen tops up her rum and coke on time off from her job aboard a luxury yacht.

Her family is spending the weekend at the beach where a couple dipping their feet into the turquoise waters off in the distance are the only foreign tourists in sight.

"We don't have mass tourism in Seychelles, and that's great. That is how we want it," says Nareen, 32, who asked for her full name not to be published.

Nevertheless, like most citizens, she earns her living from tourism, which makes up more than 60 percent of GDP in the Seychelles, the only country in Africa considered "high income" by the World Bank.

The Indian Ocean archipelago, a chain of 115 islands, is a byword for luxury holidays, Instagram-perfect beaches and has gained a reputation as a honeymoon idyll.

But it is confronting a tug-of-war over how to keep the economy growing, while protecting its fragile ecosystem.

"More tourists means it's better for the economy, but it's not the only thing that comes into play," Nareen says.

High-end tourism, from Europe mainly, helped pull the Seychelles from the brink of financial ruin after the 2008 economic crisis.

Visitor numbers almost doubled in the decade that followed, to around 360,000 in 2018, nearly four times the country's population.

But now the Seychelles is grappling with how many visitors it can realistically accommodate. An official study commissioned into the matter is due to begin soon.

In the meantime, the government placed a moratorium in 2015 on the construction of large resorts on the three main islands of Mahe, Praslin and La Digue.

It wanted both to protect the environment and encourage the growth of smaller, locally-run hotels.

On further-flung islands, the Seychelles practises a "one island, one resort" policy.

The Seychelles has 6,000 hotel rooms, but another 3,000 are in the pipeline, having been approved before the moratorium took effect, Dogley said.

Nearly half of the Seychelles 455 square kilometres (176 square miles) are classed as protected areas.

By later this year, 30 percent of its 1.3 million square km of marine territory will have protected status too, under a special arrangement in which conservation groups agree in return to pay a small portion of Seychelles' national debt.

The country has two UNESCO world heritage sites: the Mai Valley and its indigenous coco de mer palm trees, and the Aldabra Atoll, home to the Seychelles' famed giant tortoises.

With a few exceptions such as the popular Beau Vallon Beach on Mahe or Anse Source d'Argent on La Digue, regularly named one of the world's most beautiful beaches, tranquility reigns on the islands.

Most beachside resorts keep a low profile, blending into the jungle backdrop that reaches into the island's interior from the white sands bordering the azure shores.

"It all depends on the standards that you want to maintain," said Nirmal Shah, executive director of environmental NGO Nature Seychelles.

He believes that some of the more popular sites have already reached their full capacity.

The Seychelles, he said, "really do not want to become" an eyesore like some beaches in Europe, crowded by umbrellas and edged by concrete.

On Grand Police, in the south of Mahe island, locals have been angered by a Gulf company's plans to build a new resort, approved before the 2015 ban.

The project is unpopular over concerns about the health of a local marshland but also because most large resorts are owned by foreign groups.

The government has promised to talk to those behind the new resort to explore how the proposal could be dropped.

Despite environmental pledges and efforts, Dogley said that much still had to be done in Seychelles to ensure a sustainable tourism industry.

Large hotel groups have put measures in place to limit their impact on the environment, such as having their own vegetable gardens and reducing plastic and energy use.

Smaller, Seychellois-owned establishments, though not leaving the same ecological footprint, sometimes lack the resources to match these efforts, despite government incentives.

"Given our small population, the number of tourists is huge, and it is difficult to absorb the footprint of so many visitors," said Shah.

More than a quarter of the workforce is foreign, he pointed out, especially in the tourism and construction industries -- unemployment is only around 3.5 percent.

The tourism industry faces other constraints, too.

The small, hilly country is forced to import more than 90 percent of its goods, and most of the energy needed to keep the islands running is derived from oil-powered generators.

Still, the pursuit of eco-friendly growth over profit alone has struck a chord with some visitors.

"We didn't know much about the ecological side of tourism in the Seychelles... but once here, it really hit us," says Romain Tonda, a 28-year-old French tourist on his honeymoon on Cousin Island, fringed by coral reef.

"It's not perfect, but we can see that it's something that is important for the Seychellois."