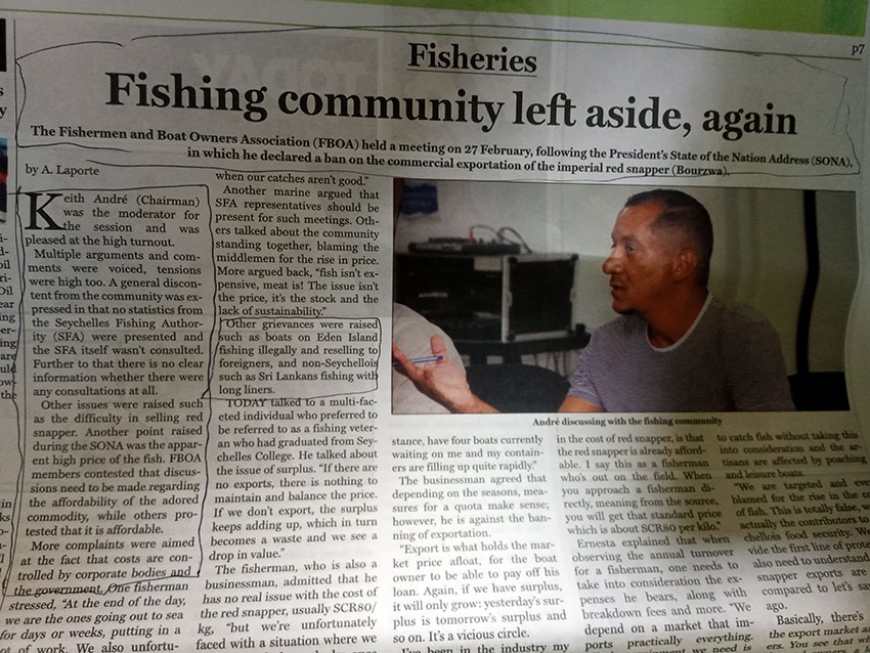 According to the Today in Seychelles of 28 February 2020, the Fishermen and Boat Owners Association (FBOA) held a meeting on 27 February following the President's State of the Nation Address (SONA 2020) in which he declared a ban on the commercial exportation of the imperial red snapper (bourzwa).

The Chairman of FBOA Keith Andre was the moderator of the meeting. Multiple arguments and comments were voiced, and tensions were high, Today reports.

It was noted that no statistics from the Seychelles Fishing Authority were presented and the SFA itself was not consulted. Furthermore, there was no clear information on whether there were any consultations at all.

Other issues raised according to the article, included difficulty in selling red snappers. One of the issues raised during the SONA was the apparently high price of the fish.  FBOA members contested that discussions need to be made regarding the affordability of Bourzwa, while others protested that it was affordable. More complaints were aimed at the fact that costs are controlled by corporate bodies and the government.

Other grievances were raised such as boats on Eden Island fishing illegally and reselling to foreigners, and non-Seychellois such as Sri-Lankans fishing with longliners.

Read 793 times Last modified on Monday, 02 March 2020 11:53
Rate this item
(0 votes)
Tweet
More in this category: « Proposed Ban on Red Snapper Exports in Seychelles Sri Lankan illegal fishing vessel is the first to be intercepted in 2020 »