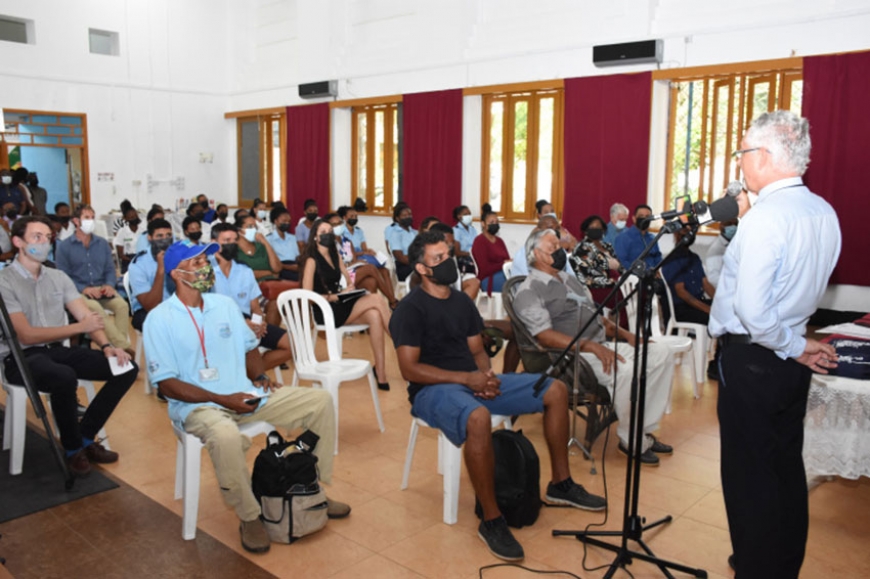 (Seychelles Nation 30.3.22) : A voluntary project by the fishing community on Praslin aimed at protecting fish stocks has produced positive results, to the satisfaction of all involved. The Praslin Fishers Association in collaboration with the Seychelles Fishing Authority (SFA), environmental NGO ‘ANBA LAO’ yesterday presented their findings on the voluntary fisheries zone closure on Praslin.

Presenting the findings, Mr Green said that at first there were a couple of fishermen who were skeptical of the project and declined to be part of it but after the first closure they came around as they saw its benefits.

The project was first initiated by the fishermen themselves who aimed to protect their fish stocks.

“To protect the resource, we need to recognise and promote these experiences,” said Mr Green.

The project first appointed a committee which then organised awareness campaigns and surveys.

The project was a voluntary closure of the bay of Baie Ste Anne Praslin from November 1 to April 30. During the closure no fish traps were allowed in the bay and yellow buoys were placed to demarcate the ‘voluntary temporary fishery closure’.

Further, during the temporary closure period, the association would catch and release the fish for scientific purposes and data collection.

Mr Green said that in their findings the fishermen saw that the fish had managed to grow and multiplied which benefitted them and the Praslin community in general.

The Praslin Fishers Association also showed a short documentary on their processes, findings and opinions.

Minister Ferrari said he is extremely proud of what the fishermen of Praslin have done and that it is important to teach the youth that there are benefits in managing our resources.

He added that they wish to bring the same mindset to all other districts and pass on the message through the fishermen’s associations.

He highlighted that it is a great achievement when people take the initiatives themselves rather than always relying on government.