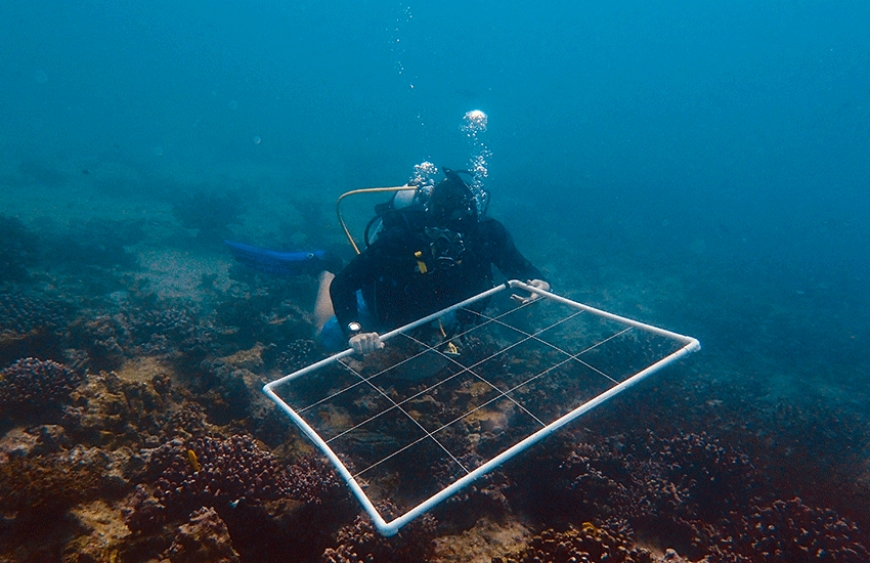 Special and stunning sightings on our designer reef

Throughout February and March, Nature Seychelles’ Reef Rescuers team have been hard at work surveying the project sites around Cousin Island Special Reserve, a really important part of the coral reef restoration process. The aim of the large-scale assessment was to quantify the effects of the 2016 bleaching event and to assess the current status of the project, 7 years on from its inception.

To assess the reef, the team surveyed several key resilience indicators including; benthic structure, invertebrate and fish populations, coral recruitment and adult coral population and health. Abundant and diverse populations of invertebrates, fish and corals are a key sign of a healthy reef whilst high levels of natural recruitment indicate the potential for successful reef recovery, following a large-scale disturbance of this kind.

The Reef Rescuers team have enjoyed every bit of the intense six weeks of surveying, despite experiencing some tough conditions. Surveying is a great opportunity to get up close and personal with some of the beautiful marine organisms on the reef, including corals and cryptic invertebrates such as Nudibranchs which often display beautiful colours and markings, designed to ward off predators.

The Nudibranch Thuridilla gracilis, only 2cm long showing off its vibrant striped pattern.

Encountering a school of 35 Bumphead parrotfish (Bolbometopon muricatum) on the designer-reef was a particular highlight, as the species is declared ‘vulnerable’ (IUCN Red List Classification of endangered species) and is not often sighted in such large numbers within the region. Unfortunately, these guys can be a bit of a problem for the reef as they have a large appetite for coral, chomping on branches as they pass by.

All in all, we are looking forward to the conclusions of the assessment as positive signs of natural recovery have already been observed. For now, it’s back to the nursery to continue taking care of the young ‘super-corals’ which are almost ready to be added to the reef.